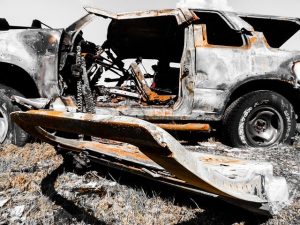 The title of this post probably sounds ridiculous, but it’s true. I recently totaled my car and ended up getting more money (approximately $12 more) from my insurance company than I paid for the car ten months earlier.

Of course, once you account for the car maintenance and some other expenses, I didn’t really “make money” but I did come out much better than I would have ever imagined after totaling a car. I would have rather not had an accident at all (don’t try this at home!), but the whole ordeal was a learning experience and reminded me of some important financial lessons related to cars.

It was just after midnight, and my wife and I were on the last leg of a 13-hour road trip. We had attended a friend’s wedding in Arkansas, and had about 45 minutes to go. I was feeling good–I had just finished a potent cup of Dunkin Donuts coffee and was blaring some bluegrass music (we were driving through the mountains, after all). All of a sudden, a deer darted into the road and in front of our car. I didn’t have time to react, and we plowed straight ahead into the deer traveling at interstate speed.

Seconds later, smoke was coming from everywhere, the hood was totally crumpled, and I knew we’d totaled our car. There were many silver linings, though: our toddler wasn’t with us on this trip, the airbags didn’t go off, and even though our car was barely drivable, we were able to make it about one mile to a hotel. But it was still a traumatic experience, and it took me all night to settle down and shake it off. 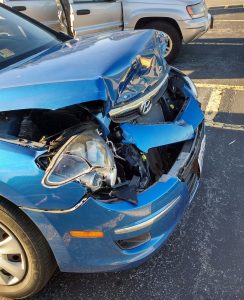 Here’s a look at the damage.

Once I realized we were safe and everything would be OK, I began to panic about the financial implications of what just happened. This was only the second car I had ever owned, but it was much more expensive than the beater I used to drive. I was anticipating that the insurance company wouldn’t cover the accident or if they did that they wouldn’t give me a fair deal on the car’s value. And what if the car wasn’t actually totaled? Then they might fix it, but my car would have an accident on record (making it tougher to sell later) and might not be as safe in a future accident.

Lucky for me, the car was totaled and my insurance company treated me very fairly. But part of this worked out in my favor because of decisions that I made in the past–such as the type of insurance I put on the vehicle and how I researched the vehicle purchase. Here’s a closer look at some of those lessons.

Lesson #1 Comprehensive Coverage is Worth It

Comprehensive auto insurance is a must have. If there’s any doubt in your mind about whether you have it, you should stop reading this, pick up the phone and call your agent. Comprehensive coverage protects you from “acts of God” which are those events that are totally beyond your control and don’t involve simple collisions with other cars. Some examples would be a tree hitting your car, your car getting flooded or hitting an animal. These are events that often total a car, which makes the coverage even more important. After all, a fender bender wouldn’t really set you back even if you didn’t have insurance. But if a tree falls on your car and you don’t have coverage, you could be losing a significant amount of money. If the car is financed, you’re in even bigger trouble. You’ll owe the bank and have to get a new ride. Plain and simple, comprehensive coverage is a must have.

Lesson #2 Advocate for Yourself

I also learned how important it is to advocate for yourself in a situation such as this. I knew that I couldn’t influence the situation very much (thankfully there are lots of laws and regulations about how a car is evaluated after an accident), but I wanted to make sure I was treated fairly. It took several days for my insurance company to tow the car and sort out everything with the body shop. The body shop had to assess the damage to determine if the car would be a total loss or repairable. Every day, I called the insurance company and/or the body shop to check in. And I made it very clear that I was willing to accept the conclusion that the car wasn’t totaled, but if it was a close call, I highly preferred the car to be considered a total loss, in order to have peace of mind that I wasn’t driving something unsafe for my family.

I have no idea if my persistence influenced the decision to total the car, but it helped me stay informed about what was happening behind the scenes and at least put my mind at ease, knowing that my insurance company was doing everything by the book to ensure a fair conclusion for all parties.

This was a huge takeaway for me. I bought my car in December 2015 for $10,888, ten months before the accident. And in that time, I put about 10,000 miles on the car. So when it was totaled, I was hopeful that the insurance company might give me $9,500 for the car. Certainly it had lost some value over that time, especially considering the additional mileage. Instead, they determined that the car was worth $10,900! Unbelievable, right?

Here’s why it happened: I got a great deal when I purchased the car for $10,800. It was probably worth $12,000 or so at the time. I got the deal because I researched the purchase carefully, and waited for the right opportunity. It wasn’t a sexy car or the most popular model, but it had all the features I needed plus good fuel economy and was listed at a great price. The salesman told me they were selling it so cheap because it was a used Hyundai but they were a Chrysler, Dodge and Jeep dealer. At the time, I didn’t really buy that logic, but maybe there was something to it.

The point is that by making frugality a priority many months ago, I was able to prevent an already bad situation from being much worse. And luckily, I was able to get another great deal on a car after totaling this one by purchasing from Carvana. Here’s my review of Carvana.

I hope you never total a car. But I also hope you put the protections in place so that if you do total a car the situation will be much more manageable. And, I think there’s a bigger and simpler message here. Research your purchases, buy an affordable option that meets all your needs, and prepare for the worst-case scenario in advance. Doing those things can prevent, or at least limit, financial difficulties down the road.