Albert Einstein is widely reported as having made the statement, “The most powerful force in the universe is compound interest,” and after looking at the math behind this concept, I definitely agree with him.

I know a lot of people can get lost with detailed mathematical formulas, so we’ll skip those, but this is so unbelievably important to understand and appreciate that we need to run an example.

This $100 difference doesn’t sound like much, right?  How can this be “the most powerful force in the universe” or a “miracle” as it is often called?

Let’s look at this example at different intervals over a 100-year period:

Just for fun though, first try to guess how much the final balance will be in the compounded example at the end of Year 100 and let me know what your guess was in the comments section below (as a little inspiration, you know the non-compounded number will be $110,000 (100 years of $1,000 interest pus $10,000 initial investment)):

Now you can see why everyone who understands this concept is so blown away by it!

Let’s look at the compounding example but with “only” an 8% interest rate: 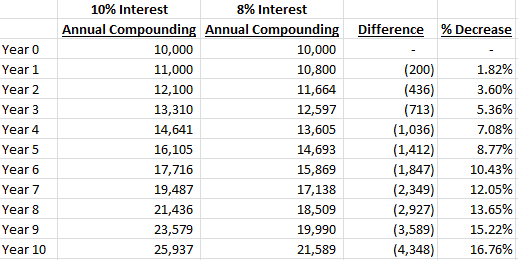 Again, the difference isn’t that large after Year 10, but let’s look out to Year 100:

What that means to me is that every little bit of additional return on your investment is essential, and you have to do everything in your power to maximize your return.

As we’ll show in a follow up post, since there basically isn’t a person alive who can beat the stock market returns over a 50 or 100 year period, the best way possible to do this is to invest in an ultra-low expense ratio mutual fund that mirrors the total U.S. stock market.