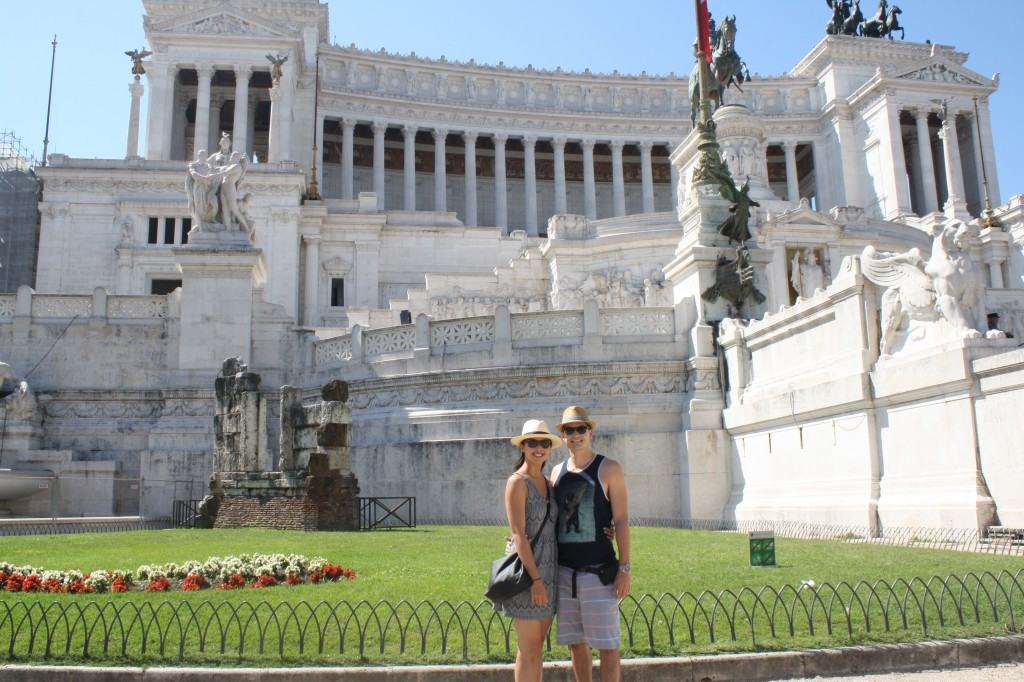 My Wife and I Hanging Out In Rome

A lot of people look forward to their wedding day but any good miles and points blogger will tell you that it’s all about the honeymoon!  My wife and I got married over the summer and while we did have an amazing wedding day, I was looking forward to our two week European honeymoon almost as much.

My wife is actually a student so we only had a short period of time to get married and take a honeymoon right in the middle of July.  And as anyone who’s gotten married or traveled during July can tell you, that time of year is not ideal for either activity.  July is the absolute peak of wedding season so everything is more expensive and as we know, it’s also a peak time for travel.

We knew we wanted to go to Europe but we wanted a mix of beaches and history.  If you’re going to book a big trip like this, it helps to research flights in tandem with picking where you want to go.  So what we actually did was look at a few different places and then see if there was any award availability to those destinations.

We ended up picking Italy, Croatia, Greece and Spain as possible destinations but after researching flight availability we decided on Italy and Greece.  I wasn’t able to find any award availability to Spain or Croatia so in this case it helped to be flexible with our destination.  If we would have been set on Croatia or Spain we probably wouldn’t have been able to pay with miles.

I normally try to fly during off-peak times like the spring or fall since there is more award availability and everything is a lot cheaper.  But this was actually one of the first trips I’ve ever booked with miles and points during peak travel season.  And one of the reasons why I feel that I had so much success was because I started game-planning way in advance.

I had all of our flights and hotels booked over 7 months before we were scheduled to leave.  It was definitely a lot of hard work but so worth it since it allowed us to take a luxury honeymoon that we likely wouldn’t have been able to afford without points and miles.

How Much Did We Save?

We ended up spending 15 nights in Europe (4 in Rome, 3 in Santorini, 3 in Naxos, 3 in Athens and 2 in Istanbul) and took 5 separate flights: LA to Rome, Rome to Santorini, Naxos to Athens, Athens to Istanbul and Istanbul to Los Angeles.  Now here’s where it gets fun and a little math-y: 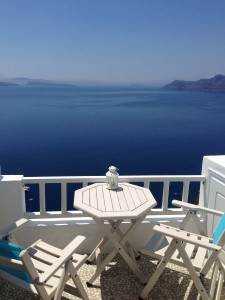 The View From Our Balcony in Santorini

Okay, we admittedly splurged on hotels, but this was our honeymoon, so why not, right?  If we wanted to do this 15 night trip for close to free we certainly could have, but we wanted to really live it up and stay in luxurious places.

Some of the redemptions that we booked had a cash and points option so we decided to save some points and get a better redemption rate that way (Starwood Preferred Guest is one of the best programs to use this strategy with).  Since we paid cash and points, we were able to stay at some of the top properties in Europe for a fraction of the cost.

It was actually pretty amusing to be staying at The Westin Excelsior in Rome knowing that other people were spending close to $600 a night for a room when we only paid $200 plus some points.  We did end up splurging in Santorini though but that room was still less than our cramped Italian hotel room facing the alley.

Booking all of our flights with points was where we really scored since all we had to pay for was the taxes and fees for all five our flights (including round-trip from the west coast to Europe) which came out to a grand total of $237.

Adding It All Up

When you add everything up, we spent $3,079 and used 436,000 points for 15 nights of hotel rooms and 5 flights (all for two people).  The total cost without points would have been $10,096, so we saved $7,017 on our honeymoon.  The thing I like most about traveling with miles and points is that you get to experience lots of things that you would normally have never been able to afford.

We love to travel and there’s really no greater feeling than knowing you are paying next to nothing for a luxury hotel room or a business class flight on Turkish Airways.  Those who know me will tell you that I am one of the cheapest people on earth but when it comes to travel you really can get some amazing deals if you know what you’re doing.  This was a once in a lifetime vacation that took an extensive amount of planning but if it wasn’t for those 436,000 points I would have never been able to take this trip.

Readers, what do you think about my honeymoon and all the points it took to get there?  Where did you go for your honeymoon or where do you plan on going?

About the Author: Harry Campbell is a 28 year old aerospace engineer, blogger and freelance writer. He runs his own personal finance blog at Your PF Pro and has been passionate about travel since an early age. Harry loves to write about using miles and points to travel and over the past 5 years he’s racked up over 2.5 million points!