We recently started exploring the industry known as Peer-to-Peer (P2P) Lending, and the more we learn about it the more excited we become by the industry as a whole, and specifically by the market leader Lending Club.

It’s still early on, but we’re earning over a 15% annualized return on our money so far, with over $12,000 invested, and history and the math behind it suggest that we can likely sustain a return of over 10%, which compares quite favorably to the 0.8% we’re earning in an online bank!

What is Lending Club?

Lending Club is a platform that connects borrowers and lenders – regular people like you and me on both sides of the equation – and, due to the wonders and low overhead of the internet, facilitates direct lending at a much lower cost than a regular bank or credit card company.

What that means in real life is that a borrower can apply for a loan (up to $35,000 over either a 36-month or 60-month term) through Lending Club and they will almost certainly get a lower interest rate on their loan than at a comparable bank in their community.  So it’s a winning situation for them.

On the lending side, it enables people like us to actually become banks and to earn amazing returns on money that otherwise might be sitting idly in a low-yield account.

And you really truly are a bank/loan underwriter in this system, as you get to see intimate details of each potential borrower and you can then determine if they meet your criteria for lending.  There are usually 200-500 loans available on the platform at any given time, so you have many options to sort through to find matches for your investing profile.

Each month you receive a payment from each borrower that contains both principal and interest components and that cash is deposited back into your account to either withdraw or to invest again.  Once you have $25 worth of repayments on hand you can then purchase your 101st loan, and so on.

Lending Club facilitates all this, so they really act as your bank’s back office team.  They take a small percentage service fee, but it’s something I’m more than happy to pay considering what they take care of for you.

First, they initially screen out roughly 90% of the loan applications that they receive, so only the remaining 10% that get through their initial checks are actually put on the Lending Club platform for potential funding.  Every single one of those loans continues to receive rigorous background checks and testing of the veracity of the information they submitted.  So quite often you’ll invest $25 in a loan only to subsequently see it fall off the platform and not issue.

What happened in this case is Lending Club determined this borrower did not check out and they declined to offer them the loan, even though it was funded by outside money.  This is one of the most reassuring aspects of Lending Club, as you know they want to safeguard their lenders and their platform, so their interests align with the lenders.  They have floated plans of an IPO in 2014, so it is absolutely in their best interest to keep everyone happy and keep investing returns high.

They also receive and process all the payments and disperse the proportional amounts to the lenders.  In situations where there are late payments they actually contact, and in some cases track down, the borrowers to collect.  A complete trail of all contact information is available on the individual loan page, so they fully document everything.

Lending Club has grown dramatically and their profile rose considerably when Google recently invested a reported $125 million for a 7% stake of the company.  Lending Club has seen their loan growth explode as well:  it took from inception of the company in June 2007 through November 2012 for them to issue their first $1 billion of loans.  They are now on track to go from $1B to $2B just from November 2012 to the end of June 2013!

What Kind of Returns Can I expect and is it Risky?

These are unsecured loans, so there is obviously a level of risk involved.  You don’t personally know this borrower, nor does anyone else combining with you to fund the loan, so you can’t look them in the eye and demand your payments.  I thought this was a concern originally, but quickly concluded that was a naïve way to approach this entire issue.

This is math, pure and simple.  That’s how a bank would look at it, and they are making billions off similar loans, so that’s how I’m looking at it.

Lending Club has a great set of charts that they continually update that shows “Investor Returns by Number of Notes.”  They have three distinct charts that show the returns of people with 100+ notes, 400+ notes and 800+ notes.  So this equates to at least $2,500, $10,000 and $20,000 invested respectively.

Not one single person who has at least 800 notes has ever experienced a loss!  The math therefore suggests that if you invest $20,000 you are nearly certain to make money.

I’ve included pictures below of each of the charts for 100+, 400+ and 800+ notes so you can see the approximate breakdown of returns.  This is an odd investment in that the more you invest, the lower your risk, as the returns are more likely to revert to the mean and you’ll be less influenced by individual defaults and, for lack of a better term, unlucky loan picking.

For instance, if you have only 10 notes and you get disproportionately unlucky, you might have 3 or 4 people default and you’re almost certainly going to have a loss.  If you have 800 loans, the likelihood of you getting unlucky to the degree that it skews your returns dramatically away from the average is almost zero. 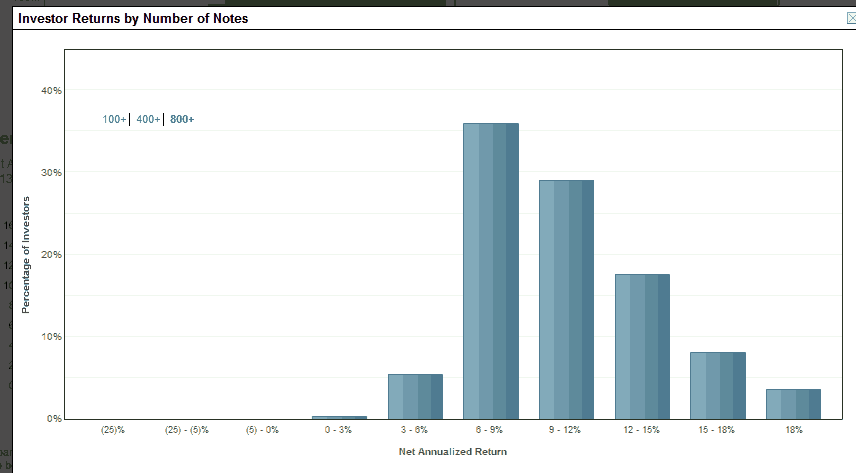 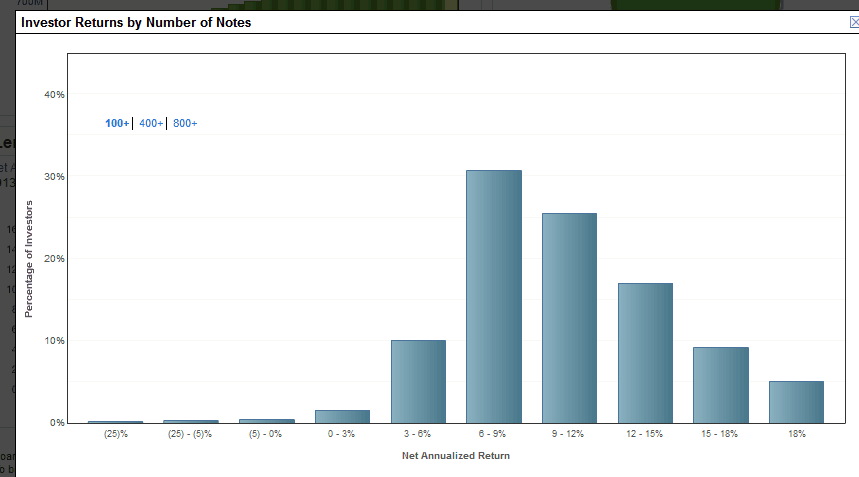 How we Filter Loans and Determine our Investments

The first thing to point out is that, unless you’re investing a huge amount of money, you should always limit your investment in each particular loan to $25.  There is no valid reason I can come up with why you’d want to invest more in one loan, as it just increases your risk and reduces your diversification.

Once you’ve deposited your cash, it’s now time to sort through some loans.  I’m a big fan of Peter Renton’s Lend Academy blog, and I’ve picked up a bunch of tips from his investing profile and through my own reading and research, so here’s my set of filters:

Based on the following chart, the highest returns are for the credit grades D, E and F: 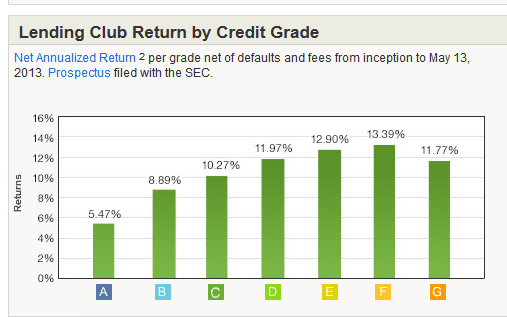 You might be tempted to go the safe route and invest in Grade A or B loans, but you’re really just reducing your return that way.  I did this at the very beginning and I’ve since determined that I’ll never invest in an A or B rated loan again.  So I primarily set the filter to only see D-F loans and will sometimes include C grade loans as well.

I set the Delinquencies to zero and the number of credit inquiries to zero.  I’m not interested in people who have recently been shopping around for credit.

I filter out residents of California and Nevada, as I’ve read their default rates are considerably higher than the remaining states.

I only invest in loans where people are consolidating debt, as those have the highest returns and make the most logical sense to me.  If you’re looking to remodel your home or pay some medical bills, then someone else will fund the loan, not me.

I set the filter to include only people with a monthly income greater than $4,000 and who have been employed for at least 2 years.  These seem to be markers to me that they at least have the income necessary to pay back their loans.

Finally, I think there’ some value in following the advice of the “crowd.”  So, if a loan fits my filter but it’s only been funded 5% of the requested value and it’s been on the platform for a day or two already, I assume there’s something objectionable about it and just move on.  There are plenty of other loans to invest in that it isn’t worth the time to investigate.

Since I do have over 500 loans currently, I get repaid often enough that I’m investing in a new loan every few days.  It only takes  me about 1 minute to get my money invested, as I open up my saved filter and pick which one appears ‘best’ to me (usually the highest interest rate coupled with a significant percentage funded).

As the title of the article suggests, this really is a lot of fun!  It’s amazing to be in a position where you can act as a bank and earn a great return on your money while theoretically doing something positive for someone looking to consolidate debt and lower their monthly payments.

I’ve found that, just like in the real world, loans go into their ‘grace period’ (similar to your mortgage, you get 15 days after the due date before it’s considered a late payment) quite often and it’s nothing to get worked up about.  I used to write down every loan that went into the grace period, but then I saw that nearly all of them recovered and I was just wasting my time and mental energy.

The only default I’ve had to date was because the borrower actually died.  The collection log said, “Attempted to contact borrower.  Borrower deceased.”  I didn’t expect to see that, needless to say.  Amazingly, Lending Club will attempt to collect from their estate, so there’s a chance of some recovery.

My Current Issues with Lending Club

My biggest issue is that it takes a decent bit of time to fully invest your money.  They are a victim of their own success in this regard, because the loans that make it to their platform are quite often funded within the first 24 hours and Lending Club has not had the time to perform any of their income and other verifications.  So, you’ll invest your money, it funds within a few hours and then it’ll sit there for 5-10 days while they perform their checks.  If the loan at that point doesn’t fund, you’re back to the starting point again on that $25, no closer to investing that money.

I do not like that they have not rolled out an automatic investment function for money that’s sitting in your account.  I’d love to be able to apply my filters and have them invest idle money in a loan that fits that profile instead of my having to log in every day to see if I’ve accumulated $25.  Prosper, their rival P2P firm, has this type of auto-invest mechanism.

This is a very illiquid investment, which is understood from the outset, but they do have a secondary market that allows you to buy and sell previously issued loans.  I’ve heard nothing but bad things about this platform, and have decided not to investigate it further until they make it more user-friendly.

The only lingering concern I have is that the majority of their loans have been issued over the past 12 months, so while there is a payment history going back to 2007, the majority of the loans are quite new.  I have no reason to believe they will perform differently than the first five years of loans we have historical data for, and as mentioned earlier, their interests align with mine, but I can’t help but be slightly concerned that they changed some aspect of their review process for the worse in their need to have available loans for the influx of investors.