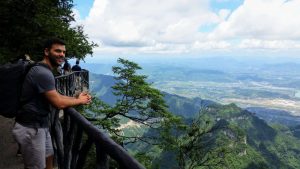 I recently took a trip to China to visit my brother who lives and works there as an education consultant. We spent a few days hiking and also exploring Changsha and Hong Kong. The trip was semi-unexpected as I made a last-minute decision to go. But luckily, I was still able to use United miles, and landed what I think was a pretty good redemption. There were definitely some bumps along the way, and some valuable lessons I learned from the experience, which I will share here.

Despite being relatively informed about travel and points (and blogging about them all the time), this was actually my first international award redemption. And…just my second international trip, ever. Luckily, I had a fair amount of background knowledge going in, but I also made a few mistakes.

The biggest limiting factor to my booking, was that my brother’s plans were uncertain. Travel dates and my destination/returning outbound airport were all in flux until the last-minute, as my brother juggled his work schedule, the itinerary for our visit, and his upcoming visit to Hong Kong. This all made the booking a bit more complicated. 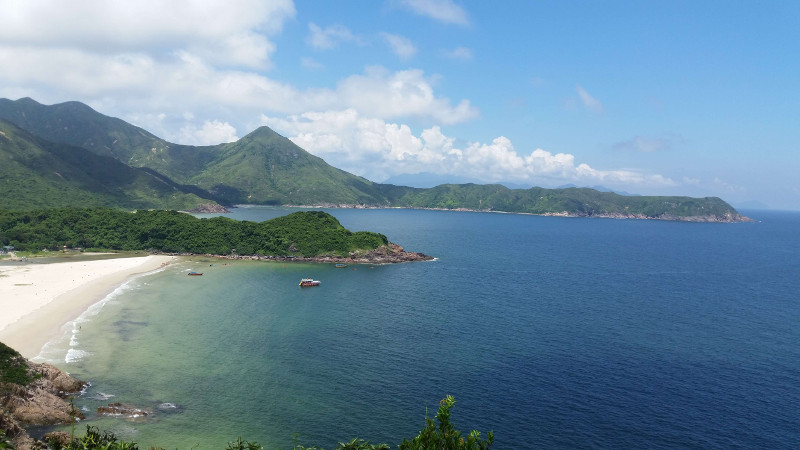 Can you believe this is in Hong Kong? Not Fiji or Hawaii…

Also, I was booking the flight right at 22 days before the trip, which added some pressure in order to beat the close-in fee, which kicks in at the 21-day mark for United.

To redeem the flight, I transferred my Chase Ultimate Rewards to United, which was very simple and processed instantly. I booked a business class ticket from Richmond to Changsha, China ( a grueling three-leg trip), and I flew back on an economy ticket from Hong Kong to Richmond, with a stop in Chicago.

My outgoing flight came in at 70,000 MileagePlus miles, and my return trip was 40,000. The outgoing flight in business class was selling for about $5,000 and the coach ticket back was going for around $800 at the time I redeemed. So my 110,000 points earned me about $5,800 in value, which is a pretty good deal, especially on a last-minute booking.

That said, my redemption was a bumpy ride, and I learned/was reminded of some important lessons along the way.

#1 When in Doubt, Hold Your Flight

When I first started doing my research, I had noticed award availability on the outbound and return trip between Charlottesville and Changsha (where my brother lives). This was a pretty sweet itinerary, made more convenient by the fact that I wouldn’t have to drive out of town to another airport. Also, the flight durations were tolerable at around 21-24 hours (vs 30+ hours on some itineraries).

To make a long story short, when I eventually made my booking, this route no longer had award availability (just a few days after I had first seen it). I learned from a United rep that I could have them hold my itinerary, when booking with points, for three days at no charge. Ultimately, it wouldn’t have mattered in my case since I ended up needing to fly out of Hong Kong rather than Changsha, but this might be a strategy I take advantage of in the future when my plans aren’t yet set in stone.

Luckily I was able to avoid any close-in fees, but just barely. That said, I did play around with a few bookings (since I knew I had 24 hours to cancel for a full refund). In doing so, I learned that a popular loophole now appears to be closed.

There’s quite a bit of documentation online about an old trick to dodge this annoying close-in fee. Basically, if a flight you want to book is within 21 days (and subject to the fee), then you should instead book a similar (or the exact same) itinerary in the future. Then, once that’s booked, you could change the flight within 24 hours. By changing it to the original flight you wanted, the system would allow you to bypass the close-in fee. I tried this, out of curiosity and because my travel dates were semi-flexible.

If my experience is any indication, then the United close-in fee loophole no longer works.

#3 Change Fees Are a Fact of Life

When I book an award flight, I expect the end result to cost as close to $0 as possible. So, the idea of ever paying a fee to change my itinerary, or because I booked within 21 days, annoys me to no end. However, like I said, my plans were totally in flux with this trip. Not to blame my brother, but there was a lot up in the air on his end that would directly affect my plan.

So, I ended up having to pay a change fee, as I needed to change my arrival city to better accommodate my brother’s schedule. Annoying? Yes. The end of the world? No.

The night before I was heading to China, my brother updated my on our schedule for when I arrived. As it turned out, we would be taking a 5-hour train ride, overnight in a train car with just basic seats (no bunks), almost immediately after I landed from a 13-hour flight. Whew, that sounded pretty grueling.

I typically don’t like to fly business or first class, simply because that means my points don’t stretch as far for more flights. But, in this case, it seemed worth it. I would desperately need some good sleep in order to have energy once I arrived.

Unfortunately, changing my ticket from coach to business class would trigger an additional change fee. But, I was able to call a rep, explain that I had already paid one change fee, and request that they waive the second fee, especially since I was paying them MORE by upgrading. Luckily she agreed.

#5 Business Class is Worth it Sometimes

Again, I really don’t love these luxury upgrades. Especially in the case of Ultimate Rewards–those can be redeemed for cash (which I can spend on ANYTHING), so I like the idea of using as few points as possible. 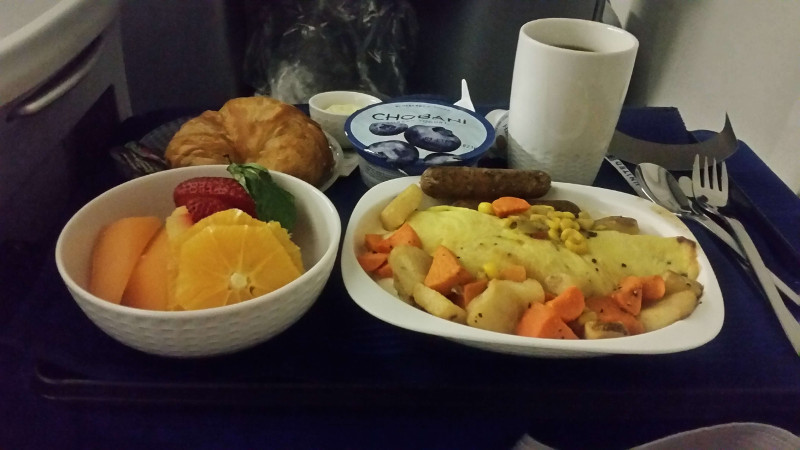 This business class breakfast was a much needed pick-me-up before arrival.

But a long-haul flight to Asia has definitely changed my perspective and shown me some instances where better service and the ability to lie down are absolutely worth it.

#6 Always Ask for Standby on Connections

When I landed in Chicago after a surprisingly long 14-hour flight from Hong Kong, I was exhausted and ready to get home. My flight to Richmond didn’t leave until 9pm, which meant my layover was 7+ hours. However, I noticed there was one other United flight from Chicago to Richmond, and it was three hours earlier than mine.

So I simply walked up to the United customer service desk, explained how tired and ready-to-be-home I was, tried to sell the point that if they put me on the early flight I would free up a seat on the later flight, and waited for them to either tell me “tough luck” or add on a $75 standby fee. Of course, I was hoping I’d get lucky, and I had purposely avoided any checked bags to make my case even stronger…

And it worked. The agent put me on standby for the early flight, didn’t charge me a fee, and told me that “The fee is waived because this is a connecting flight.” Now, I’m almost 99% sure that isn’t the official Untied policy. But it was certainly a generous offer from the agent in either case. I was first on the standby list and got home three hours earlier, which was an incredible convenience.

Overall, this was an incredible trip to visit my brother, and great experience under my belt when it comes to international award booking. I hope these tips might help you too if you make an international redemption with United. It’s certainly one of your best options for travel to Asia!