Laura and I each spend approximately $4 a month on our cell phones for a grand yearly total under $100 combined!  This means we’re paying at least $1,500 less per year than most similar couples who have the latest cutting-edge ‘smart’ phones (“poor phones”?) attached to their bodies at all times.

As you can probably guess, we never got caught up in the craze of texting or checking whatever it is people constantly check on these silly phones that allows them to somehow justify their $70+ per person per month contracts.

How Do We Pull it Off?

Even still, how can we each get away with only spending $4 a month on the cell phones that we do have?

After a lot of research, I found the T-Mobile prepaid “Pay as You Go” phone plans have a quirk that enable people like us to benefit greatly.  When you initially sign up, if you put $100 in minutes on the phone you instantly become a “Gold” member for life.  What this means is you get extra value for the minutes you purchase, but most importantly it extends the expiration of those minutes out an entire calendar year from the last purchase.  Here’s what the chart looks like on their site: 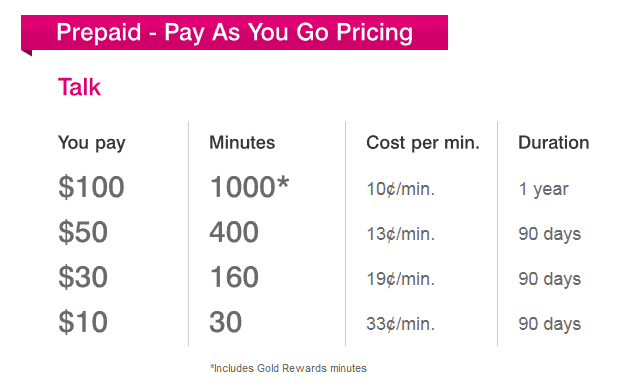 And then every subsequent purchase of minutes, no matter how small, extends all the remaining minutes out an additional year from the last purchase date.

Most people buying these prepaid phones don’t have the money or the know-how to understand the value in just putting $100 on the phone one single time, but if you do grasp it, it can save you lots of money!

So what this means in practical terms is that you sign up on let’s say January 1, 2014 and buy 1,000 minutes for $100; these minutes would normally expire on January 1, 2015.  So anytime before then if you still have additional minutes, you can buy their smallest refill pack for $10 and that extends all the remaining minutes (plus those bought with your $10) out another full year.

In that scenario you would have spent $110 on approximately 1,100 minutes over the course of two full years.  That gives you an average of 46 minutes on the phone each month for an average of $4.60 a month.

Most months we’re each well under that 46 minutes, so that’s where I came up with our $4 per month figure.

Let’s assume now that you know someone who needs a cell phone “for emergencies only.”  It isn’t hard to imagine them spending only $190 over a 10 year period for this phone ($100 initially plus nine renewals of $10 each).  This comes out to $1.58 a month!

We were able to purchase our actual phones at Wal-Mart for about $30 each, but you can certainly buy them on T-Mobile’s website when buying your first $100 of minutes.

Other ways to save on Cell Phones

Important Update: We are now huge fans of Republic Wireless and we highly recommend them! You purchase a smartphone from them for as little as $129 and then it only costs $10 per month for unlimited talk + text + wifi data. You can buy cell data for $7.50 for 500 mb and they REFUND you the amount you don’t use, which is really impressive. Click here to check them out.

Though we try to save money where we can, sometimes life intervenes and a new “need” arises where one previously didn’t exist.  Laura recently determined that she really would like to get some type of mobile internet-capable device if the price was right.  After reading this article at Mr. Money Mustache’s site, we looked into buying an iPod Touch and the additional FreedomPop sleeve.

We did wind up pulling the trigger on this, so it cost us just less than $300 total out of pocket as a one-time cost.  This gets us 500mb of data completely free each month; since this is more than we’ll likely ever need we don’t expect to spend one additional dollar on this service.

So for all practical purposes we just bought a fully capable iPhone for a one-time $300 fee.  Even if we say it’ll only last 5 years total, that’s $5 a month for the 60-month period.

With our goal of being frugal but not cheap we determined that this was something Laura placed value on and we didn’t hesitate to buy it.  And in all honesty, it’s been a really useful little device.

So we joined the modern world and saved a ton of money in the long-run, which is comforting!

We are hardly experts on cutting-edge cell phones, but after reading this article on MMM’s site, we can certainly see the value in this $19 a month unlimited plan from Republic Wireless if you use your phone a good bit.  My brother recently purchased this and he’s really pleased with the service so far.

It’s easy for us to get away with our $4 a month cell phones since we largely have no need for them, but for someone who legitimately uses their phones every day, this plan is well worth looking into.

You do need to purchase the phone itself, so that adds to the effective monthly rate, but it’s still a complete bargain as compared with traditional cell phone plans that run upwards of $70 a month.