As you can guess from the title of this article, our next big trip is to Walt Disney World in Orlando, Florida.  This will be the first time we’re going since we’ve had kids and we’re really very excited about it!

We’re planning on going at the very end of November 2014 and since we have 17 months to plan, and I’ve increased my travel rewards knowledge considerably of late, I am confident this vacation will be nearly free for our family of four to: fly there and back, spend five nights at a hotel on site at Disney and get five-day passes to the parks.

Update:  We took our nearly free trip to Disney World using rewards points, so check out the final plan.

Aside from the food we’ll eat and our transportation to and from the airport, I think this will cost us $0 out of pocket for a trip that usually costs many thousands of dollars. 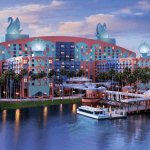 We’re going to be staying at The Swan Hotel on-site at Walt Disney World, which is right near the Epcot theme park.  This hotel, while on the Disney grounds, is part of the Starwood Preferred Guest (SPG) rewards points system, so it’s easy to get it for free!

The Swan and Dolphin, which are part of the same resort complex and both run by Starwood, are considered Category 4 hotels for the SPG rewards program.  They look like luxury hotels to me and I remember people who stayed there talking about them as if they were top-class, so that’s a hopeful sign.

These normally are redeemed for 10,000 points a night, but you get the 5th night free on all SPG redemptions, so it will cost us 40,000 points in total.  The beauty of the SPG program is that if they have rooms available to purchase, you can use your points.  So it is easy as can be.

We picked the Swan as it theoretically is a bit quieter and smaller than the Dolphin, and you get two nice queen beds; since this hotel is technically a Westin brand, you get the full experience of their famous Westin Heavenly Bed.

These hotels also include the Disney Extra Magic Hours (extended park hours) and you get the free Disney transportation and parking while at the parks, so you’re treated as if you were staying at a Disney resort, which is amazing.

Southwest now flies from Richmond direct to Orlando.  I priced out the flights and each one was approximately $240 round-trip.  For four of us that comes out to $960.  My understanding of the Southwest Rapid Rewards points is that if you use the ‘Wanna Get Away’ fares that it’s 60 Southwest points per dollar.  So that puts us at 57,600 points needed for these free flights.  We’re going to open up a Southwest branded credit card to earn the necessary points. 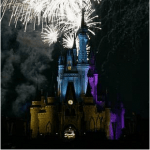 Part of our thought-process to visit Disney in November 2014 is that our youngest daughter will be just about to turn 3-years old, but will still officially be 2-years old.  What that means in practical terms is that it’ll be completely free for her to enter the Disney theme parks!

I just priced out a 5-day pass to Disney at the discount tickets site UndercoverTourist.com (a completely legitimate and Disney authorized outlet for official Disney park tickets; they were also highly recommended by MouseSavers.com) for two adults and one child and it came out to $856.

The Chase Ultimate Rewards points allow you to redeem your points for cash at a 1 cent per point exchange rate.  So we’d need 85,600 points in order to redeem for cash.  We do have enough points in our UR account (earned through credit card bonuses) to redeem for this amount

So that’s our free trip to Disney in a nutshell!

Important Note:  We recommend you read our Introduction to Maximizing Travel Rewards post if this is all new to you.  If you’re someone who carries a credit card balance or gets in trouble with credit cards in any manner, then this is NOT a strategy you should use!  Also, check out our Top Credit Card Offers page for the latest card offer we believe deserve your attention.