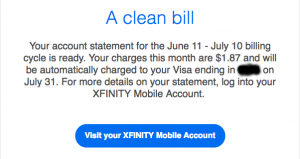 I told you before about the new service from Comcast called Xfinity Mobile. After some debate, I made the switch to their service, and I’m happy to report that my cell phone bill is now lower than it has ever been.

I paid $0 before taxes, and even after taxes my total bill was $1.87. I’m pretty stoked, obviously! Oh, and you should know that we have zero relationship with Xfinity Mobile. I’m passing this along simply because it’s a great deal that I think more people should be aware of.

There are three main caveats for how I pulled this off.

First, you can only get the best pricing on this service if you also use Comcast for Internet, home phone, or cable. Where I live, Comcast is by far my best Internet option. So it’s not like I’m “biting the bullet” to pay more for Comcast Internet than a competitor only to get the cell phone deal. YMMV.

Second, I didn’t use data. This was a big lifestyle change for me, but I’m very happy with it.

This is specifically where Comcast’s pricing model excels. Talk and text are 100% free if you’re an existing customer. From there, you can pay by the gig for $12. So it’s nice to know that even if I used a whole gig of data, my price ceiling is $13.87.

Third, the pricing could change. As I explained in my original post on Xfinity Mobile, some of the current terms are “loose.” That’s to be expected with a new service, I suppose. But all signs seem to suggest that this will be a good deal for at least a while longer.

If I wasn’t a Comcast customer, or had higher data needs, I would probably look elsewhere for my phone service first. That’s because of the loose terms I mentioned above. I’d rather go with an established low-budget provider, than risk going all in on Xfinity only to have them become much more expensive later. Plus, once you account for the additional $10 fee if you aren’t a pre-existing Comcast customer, the deal isn’t as good vs. the competition.

If you fall in this camp, then you might consider Republic Wireless, Ting or some other MVNO first.